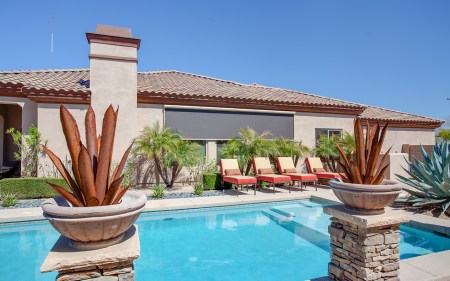 In addition to creating comfortable outdoor spaces, exterior shades like the Draper@Home FlexShade® ZIP can be used as a solar control device over windows. They work much like interior shades but locating them on the outside of the window creates some definite advantages.

Measuring the effectiveness of shades.
On many shade fabric swatch cards you’ll see one or more columns of numbers called the solar heat gain coefficient (SHGC). The SHGC is the amount of solar radiation that gets through a window or other opening. This solar radiation an either be transmitted directly or absorbed (or both) and it is eventually released into your home as heat.

How do you find out the SHGC?
We use the solar equation, which is a representation of what happens to solar energy when it reaches your window. This equation defines SHGC.

The value of SHGC ranges from 0 to 1. A lower SHGC means less solar heat is being transmitted, so the product is better at reducing HVAC costs in the summer. A high SHGC rating means the shade collects more solar heat during the colder months.

For example, an exterior shade with an SHGC of 0.10 or lower prevents more than 90% of the solar energy from coming into the home and generating heat gain.

What’s the difference?
Let’s compare absorption, reflection, and transmittance as well as SHGC in three situations:

The three images above clearly show the impact of shading on the reduction in SHGC. Focus mainly on Ts and As. With no shading at all, 33% of the total solar energy is transmitted into the room. Taking the transmitted energy as well as the absorbed energy into account gives us a solar heat gain coefficient of 0.38.

Now let’s add a white 3% basketweave shade inside the window. The transmitted solar energy is reduced to 5%.

The As figure for an interior system is greater, however. 35% is absorbed by the glass and 4% by the fabric, some of which will be transmitted into the room. The increased reflectivity and reduced solar transmission are more significant, however, resulting in an SHGC of 0.16. That equates to a 58% reduction compared with no shading!

Placing the shade outside the window doesn’t impact the amount of transmitted solar energy, which remains at 5%.  With an exterior system, however, energy absorbed by the fabric remains outside. The only heat gain will result from the 6% of solar energy absorbed by glass. Overall, the SHGC value is further reduced to 0.10, a 74% reduction compared with no shading!

This seems like a lot of math.
Don’t worry. Almost all of it has already been done for you by fabric manufacturers! As mentioned earlier, most shade fabric swatch cards will have the SHGC numbers on the back so you can compare and contrast. Electronic versions of swatch cards for dozens of fabrics from American weavers Phifer and Mermet USA are available on the Draper website for reference. However, the SHGC is only one performance measure we use to determine what will work best for you. We recommend you reach out to a Draper dealer or your Draper representative to get a complete picture of your shading needs.