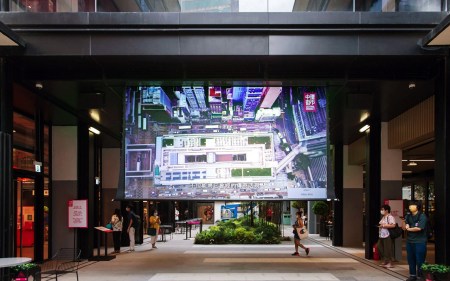 The Central Market in Hong Kong is a historic food trading market that has undergone an extensive revitalization project to become a “Playground for All,” featuring a new open exhibition space, restaurants, and pop-up stores.

Retractable screens with rear projection viewing surfaces are a great solution for several reasons, not least of which is projector placement. However, rear projection does have its own unique set of challenges because rear surfaces tend to be less forgiving than front surfaces. With front projection, the screen has only one job: to reflect projected light back to the viewer. A rear projection surface, however, must transmit as much light as possible to the viewing side while also diffusing light outward toward the edges. In other words, letting light through while also stopping light.

These competing needs can make it more difficult to achieve the perfect viewing experience. There are two main types of retractable rear projection surfaces that try to address this issue.

The first is a highly diffusive white rear surface. These surfaces tend to have lower gains and move a lot of light out to the edges of the image. They are best for short throw projection where light at the outside of the projection path hits the screen surface at shallower angles. They can simultaneously diffuse it to the audience side and still have good brightness uniformity from the center to the edges of the image.

Many of these surfaces have a 0.7 gain, are milky white, and are highly diffusive. They can easily handle projection throw distance ratios down to about 0.65:1. They are not, however, a good choice for Ultra-Short Throw projection.

The other option is a high contrast grey rear surface with less diffusive properties. This type of surface tends to have a higher gain and lets a lot of light through. Since this type of surface lacks diffusive properties, it requires a longer throw distance so the light on the edges of the projection path will hit the surface at steeper angles. If the throw distance ratio is too short and the light on the edges of the projection path hit the surface at shallower angles, most of that light will continue through the surface at that same angle and hit the walls on the outside of the audience side, and not make it to the audience.

The result is less light making it through the screen surface to the audience at the edges of the image. This creates a “hot spot”—a significantly brighter spot in the center of the image.

Many applications don’t have enough space behind the screen to allow for the correct throw distance, and typically, when a rear projection project doesn’t go well, it’s because the throw distance is incorrect.

However, the Hong Kong Central Market project is an excellent example of making the higher gain, less diffusive screen surface perform flawlessly, because the installers and planners got the throw distance right.

A Premier XL tab-tensioned screen with a 193″ diagonal CineFlex CH1200V rear projection surface was paired with the DP projector. The surface has a relatively high gain of 1.2. However, BAP and Cosmo kept true to the projector’s throw distance. The end-result was a flawless example of how rear projection should look.

To get the lowdown on the complete family of Draper projection screen surfaces, including those designed for rear projection, click here.