Did You Know? The Importance of the Structure Behind Your Video Wall 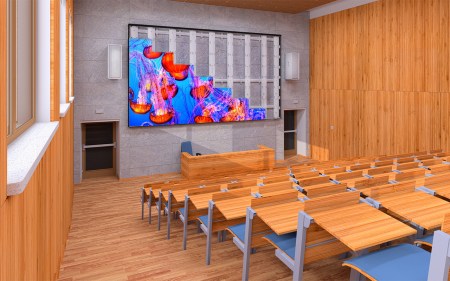 Things are always changing in the AV industry. One case in point is video wall display technology. In this “Did You Know?” post, we’ll get into those changes and explore how they have impacted mounting technology.

The first video walls in the early 1980s were made using Cathode Ray Tube (CRT) monitors. There were significant gaps between the monitors, a situation somewhat remedied by the development of video wall cubes using projectors and rear projection screen surfaces.

Other changes came, among the most significant being the move to Liquid Crystal Display (LCD) flat panel displays. But while LCD technology makes a great image, again you have the problem of gaps.

And now we enter the era of Light Emitting Diode (LED) displays. LED has several advantages, not the least of which is the ability to create a large video wall without seams.

Throughout these and other changes in video walls, Draper structures have been there, holding things together. But with the move to LED walls, the importance of the supporting structure has increased dramatically.

That’s because in order for the surface of the video wall to appear flawless the mount has to be very precise. Manufacturing tolerances are extremely tight. And because walls are seldom perfectly flat, the mounting structure also needs to allow adjustments in the x, y, and z axes. This allows the precise placement of the LED cabinets, creating the flawless, no-seam look of LED.

Even though the mounting structure is so important, it typically receives attention mainly as an afterthought. After all, nobody will ever see the structure once the video wall is completed.

Kevin Barlow, CTS-D, director of business development for Draper, puts it this way: a video wall is kind of like a diamond ring. People usually only pay attention to the diamond. But if you look closely, you’ll see the prongs which are used to hold the diamond securely in place. Nobody ever thinks about those little prongs, but without them there’d be no diamond ring. It would just be a metal circle.

Without the proper mounting structure, an LED videowall has the potential to be just another picture with horizontal and vertical lines running through it.

You can trust Draper to treat every LED video wall like a precious gem. We’ll be there, behind the scenes, making sure the star attraction is the focus of attention.

To learn more about our LED mounting capabilities, click here.

The post Did You Know? The Importance of the Structure Behind Your Video Wall appeared first on Draper, Inc. Blog.