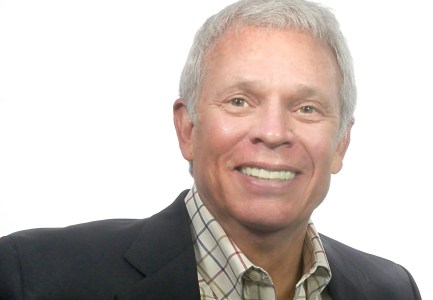 2021 marks the end of an era at Draper®,
as one of our longest-serving employees and most familiar faces is retiring.

Bob Mathes leaves Draper after 41-½ years of service. Bob
started full time on May 29, 1979. Like a few other notable examples, though,
his Draper “career” started much earlier, mowing the grass. He also worked in
production during high school and college.

At that time our Cinefold portable projection screens were being manufactured in California. When Draper decided to move production to Spiceland, Bob became the Cinefold “expert” and his sales career was born.

Bob’s determination and sales ability helped Draper grow to become the second largest manufacturer of projection screens in the world. As Draper grew, so did Bob’s responsibilities. Bob championed audiovisual sales and marketing throughout his career and was a member of Draper’s Executive Committee. He shaped Draper’s success and culture for over 40 years.

“From mowing the lawn when he was 13, to leading our audiovisual
sales, and being an important member of Draper’s Executive committee, Bob spent
his whole career growing Draper’s sales,” said Draper president Chris Broome. “Bob’s
leadership and hard work helped shape Draper. His legacy will be long lasting.”

“Bob’s sales ability and market savvy have been instrumental
in Draper becoming a worldwide player in projection screens,” said John
Pidgeon, chairman of the board of directors. “His work ethic and concern for
our customers have set the tone in our AV Department for many years.”

Bob’s position as director of audiovisual sales will be filled by Randy Reece. Randy, who grew up in Spiceland, has been with Draper since the late 1990s.

“When Bob announced his retirement date, we immediately began considering who would best fill this very important position. Randy was an obvious choice, but we knew the position would need to operate out of Spiceland,” said Lee Denhart, vice president of sales. “Luckily, Randy was open to moving back home and after several months of hard work, and a few sleepless nights, was able to sell his home in southern California and move back to Indiana.”

Randy’s experience managing the company’s west coast sales
team and his 20-plus years of experience in the AV Industry give Draper great
confidence that he can step into this new role and keep moving the Draper brand
forward.