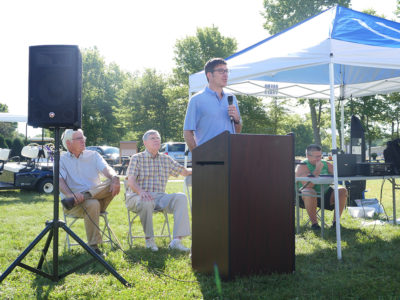 In 2019, Draper® faced the kind of trial that tests a
company’s principles. It would have been easy to throw up our hands, institute
mass layoffs, and completely abandon our customers until we could get back to
100%.

Instead, we got to work immediately, doing what we could to
start manufacturing and shipping. And in the end, 2019 ended much the way 2018
did: as a major success.

Back from the hack.
It was the worst of times, it was the best of times. That reshuffling of Charles Dickens’ opening line to “A Tale of Two Cities” is a good way to start the story of the 2019 cyberattack that hit Draper in July. These attacks have been known to bring companies down.

What we discovered during the recovery process is that we have what it takes to survive potential disasters and come out stronger: people.

In the attack aftermath, many employees worked extra hours,
took on unfamiliar jobs, and developed manual work-arounds to replace
temporarily crippled technological processes. Our IT department worked days,
nights, and weekends to bring us back. Meanwhile our dealers were loyal and
patient throughout.

In the end, we not only came back with a stronger and more secure network, we began setting daily production records within about a month of the attack, and we are ending 2019 with another record year.

More solar control innovation.
Window shade automation should be elegant, simple, and scalable. So, this year we stepped into the future of shade control. The IntelliFlex® I/O system is a highly customizable solution for motorized shades that is flexible and expandable to the size and complexity of a project.

Intelligent motors are connected to input devices through a
wired network allowing two-way communication between devices and distributing
power to them from the motors, eliminating the need for external power
supplies. This also reduces the amount of wiring needed.

When planning for window shades in areas where children will
be present, it’s important to remember that improperly installed window
coverings with closed loops, including mini blinds and Roman shades, can create
a choking hazard.

This year we introduced a new manual solution with no
operable cords. The FlexShade® Twin Pull manual shade provides all the benefits
of bead chain operation but in a child safe design. Twin Pull has wands on both
sides of the clutch to eliminate the continuous loop. The operation is simple
and intuitive: pull the front rod to raise the shade and pull the back rod to
lower it.

Screens, mounts, and structures.
Opportunities in AV mounts and structures continued to expand in 2019. We have developed key partnerships with several industry leaders to produce LED and LCD mounting and frame solutions. This year we expanded our team, adding resources and bringing AV industry veteran Grant Wylie on board as director of product management-AV structures and solutions.

We developed a new mounting solution for Barco. The Draper®
Mount Interface for Barco UniSee® is a simple but precise, elegant, and
affordable solution. It eliminates inconsistencies in wall surfaces that are
not truly flat, while universal attachment brackets simplify installation on
nearly all wall construction types.

There were also some amazing projects that showcase our ability to produce the right solution for an AV install, even when it is a one-of-a-kind project. Stay tuned as we will be sharing stories of these innovative projects very soon!

Speaking of AV, TecVision™ viewing surfaces continued to grow in popularity in 2019, particularly our ambient light rejecting formulations. TecVision screen technology has projection in more spaces than was previously possible. A sign of this success came in early 2019 when TecVision surfaces were included in the new CEDIA headquarters, located in Fishers, Indiana . More proof was provided at InfoComm, when we were named favorite projection screen manufacturer in the rAVe People’s Choice Awards .

Hitting it big.
We maintained our market leadership position despite the hacking hiccup. We completed one of the largest gym equipment projects in Draper history. We provided 24 backstops with electric height adjusters, 24 overhead volleyball systems, 24 scoreboard lifts, 17 divider curtains, and a Smart Gym Control System. In the coming weeks we will be sharing more details about the project.

We also introduced a new gym divider curtain in 2019. We developed the Paragon G to fit in smaller spaces where traditional dividers are not an option. The curtain is rolled up into a case for a more finished appearance than other dividers.

Statewide recognition.
Draper’s biggest asset is our people. And that starts at the very top, a point which was recognized at our 2019 annual employee meeting.

In addition to his contributions over 50 years of service to
Draper, John was also honored for his service and leadership in the community.

Do you have a favorite Draper highlight from 2019? Share it in
the comments!